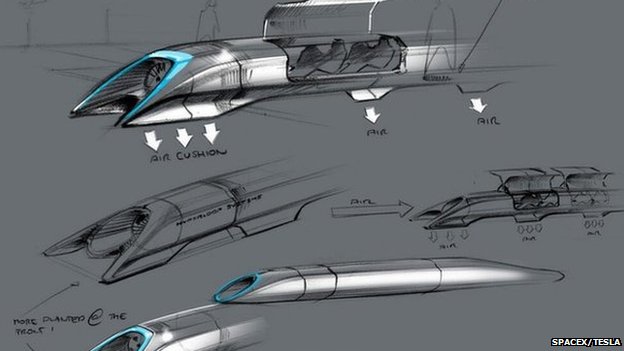 The world’s most talked about inventor, Elon Musk, is gearing up for the next step in his vision to take planet Earth kicking and screaming into a world where travel, both on the ground and in space, is augmented with technologies of his own design. The Paypal founder now plans to build a test track for proposed train system Hyperloop on SpaceX grounds.

It’s not been the greatest start to the year for Elon – the recent testing of SpaceX’s re usable rocket was brought to a standstill as the rocket failed to land properly on the fully automated drone ship landing pad – however, the pad managed to hold steady in the right place, although the rocket’s boosters and stabilizers failed to prevent the re-entry device from exploding in a very dramatic fireball.

Musk, unperturbed, is now pushing for Hyperloop to begin testing. The train system uses a metal tube to propel a passenger unit at an amazing 800 miles per hour, according to the inventor. The series of tubes would be suspended in the air over much of the US’s existing motorway grids, and provide transport between cities in minutes, albeit minus the view on the way.

The capsule rides on a small cushion of compressed air and is propelled forward through the tube via that method. As such it carries an on board fan and compressor. One might imagine that the enclosed environment of the tube will also be involved, the enclosed space helping to funnel the air as it moves the Hyperloop capsule forward.

Proposed as an alternative to the latest US plans for a super railway between cities, Musk’s madcap plan will reportedly cost a fraction of the $100 billion that the train project requires – Musk says he can do the job for just 6-10 billion. In order to do this, however, the groundbreaking tech will need to be trialed.

Musk recently announced that a small test track for the system would be created, potentially on the Texas facilities already used for his crazy projects. The five mile course will be a proof of concept for the entrepreneur, and, if it takes off and doesn’t explode, will potentially be the first of many installations using Hyperlink to be deployed in the US.

Elon Musk is probably this generation’s most valuable inventor – his efforts in future transportation span all environments, from Tesla on the road, to Hyperlink above the road, to autonomous drone landing pads in the sea, to SpaceX’s rockets in space, which should be able to travel to space and return to Earth in the least costly manner possible. The entrepreneur also recently donated $10 million to the Future of Life Institute, an organisation dedicated to global research into Artificial Intelligence.