Somewhere on planet Earth, a new hero has arrived, as a couple has named their child after the mighty Dovahkiin, the hero of recent mythic role-player Skyrim.

The naming may have been connected to Skyrim’s developer Bethesda announcing a contest earlier in the year, decreeing that any child born on 11/11/11 with the name of Dovahkiin would be blessed with gifts of free Bethesda games for life.

The potentially heroic youth, Dovahkiin Tom Kellermeyer was born at 6:08pm PST on the day of Skyrim’s release to parents Megan and Eric Kellermeyer, a lucky couple also on a quest, to give their newborn son “one awesome name”. 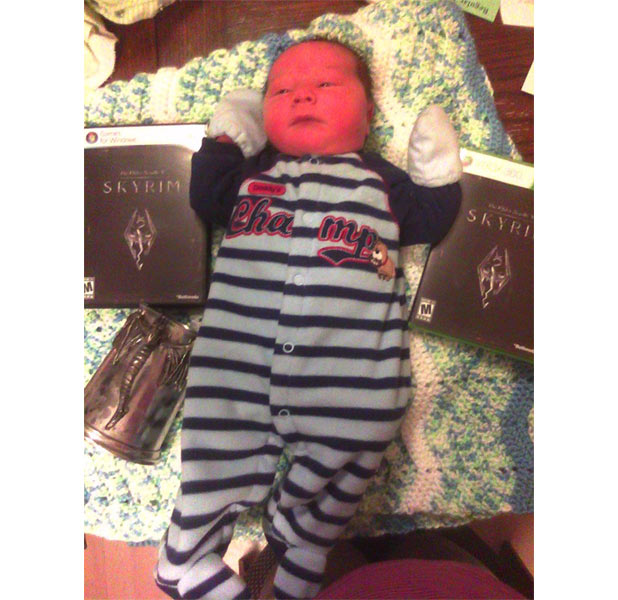 “We conceived long before hearing of [the contest]. But it’s been a tough year and I wanted to do something special for my son. My daughter has a unique name. I wanted him to have a unique name as well,” they wrote on their website.

“We’ve toyed with Dovahkiin and the ramifications of naming a child that name, and that name being based on a video game character (however awesome), and what impact that would have on him.

“But the more I thought of it, the more I settled on Dovahkiin, contest or no. It helps that we told all our friends and family and very few are opposed to the idea. My mom thought it was neat!”

They continued: “I’ve read several posts on the site and most condemn anyone who would dare name their child such a thing, all for capitalism. Well, I really don’t play many video games… and I would never name my child a name I found horrible or even terribly mediocre. I think we’re doing a great job with our daughter and will continue to be great parents for our son, too.”

In a response to the news, Bethesda added: “Be it the real world or the game worlds we create, we wish young Dovahkiin the best in all his adventures. And if Alduin ever reaches this realm, we’ll be in touch.”

Alduin of course being a massive dragon and also the Nordic god of destruction. What’s that, you haven’t heard of him? Do yourself a favour, head to stores and buy Skyrim.